Iraq war critics purged: Neocons are getting rid of their critics 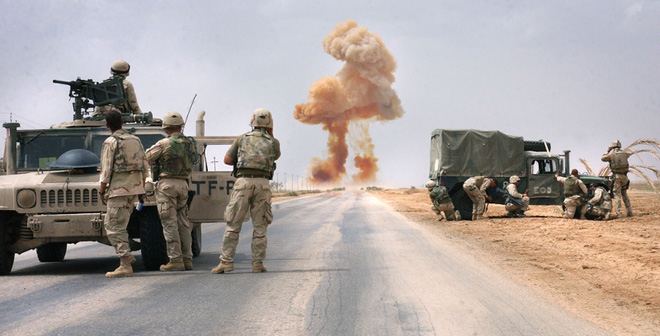 The battle of Baghdad is over, but the struggle for control of the Bush administration is just now entering its final stages, with the neocons lunging for the State Department and plenty of old-style conservatives and patriots in government returning fire in earnest. Maureen Dowd acidly notes the attempted coup at the Department of State:

She’s absolutely right that when the neoconservative faction within the administration “want something done, they will get it done, no matter what Bush thinks.” Ruthless, disciplined, and clear about their policy objectives, the neocons have always operated in the Leninist style, as befits their intellectual history as red diaper babies and Trotskyist apostates.

Lenin called the distinctive feature of his organizational views “democratic centralism,” a doctrine designed to crush all internal dissent in the Communist movement. Although, in theory, a period of open debate within the party was permitted, once a decision had been reached the matter was closed until such time as the leadership deemed appropriate. The implosion of Communism meant the end of Leninism – right? Not quite. The fall of the Kremlin, far from drawing the curtain on the Leninists, merely unveiled a new mutation. The power struggle between the neocons and various clots of resistance to their rule, now taking place in Washington, is the prelude to what the former hope is a successful coup, and the final consolidation of their supremacy in the Bush administration. Colin Powell is their Kerensky.

But their triumph is meeting some significant opposition. C. Boyden Gray and the Republican foreign policy realists have formed the Committee for the Republic, an organization explicitly devoted to blocking the neocons imperial project. Within the Washington elite a huge split is developing, and the government of the United States has been turned into a battlefield between the contending factions. The neocons want the U.S. to set off on the road to Empire, while an emerging coalition of skeptics has arisen to actively oppose them – a development our latter-day Leninists find enraging.

The importance of the party purge, a periodic cleansing of the body politic, was a central canon of Leninist theory and practice, as the history of the Soviet Union attests. WithTrotsky’s ghost recently seen walking the corridors of power, it’s no wonder the Purge has come to Washington.

First to sound the call for a cleansing is Frank J. Gaffney, the energetic hawk who heads up the Center for Security Policy (CSP): in a recent screed he denounced “obstructionism” in the ranks of the Bush administration. Certain “career civil servants” in Foggy Bottom constitute “a hotbed of covert and occasionally overt opposition to much of President Bush’s foreign and defense policy agenda.” Just as rising resistance to the occupation of Iraq is routinely attributed to the “remnants” of “Saddam loyalists,” so all opposition to the War Party’s dominance in Washington is due to “Clinton era left-overs.” Except it isn’t true.

The hottest part of this hotbed is supposedly the State Department’s Bureau of Intelligence and Research (INR), according to Gaffney, where two recently retired analysts, Greg Thielmann and Christian Westermann, exposed the machinations of a cross-agency cabal to manipulate the information reaching decision-makers, including the President. Now that the sheer enormity of these lies is coming to light, the neocons are in a panic: they don’t want any part of the blame for the developing scandal. As MSNBC’s Michael Moran put it:

“With U.S. troops dying in Iraq at a rate even the White House sees as politically unsustainable, there is a palpable desire to lay to rest any questions about the war’s real motives.”

The testimony of Thielmann and Westermann confirmed what critics of the war have been saying all along: that intelligence was cooked by neocon apparatchiks and spiced up with outright lies. The goal was to mislead the public and overcome the objections of CIA and high-ranking senior military leaders in the Pentagon who saw the present quagmire coming.

That mission was accomplished, but now the political – and human – consequences of the war are starting to roll in, and the truth is getting out to the heartland. With the bodybags also rolling in, questions are being asked, especially by the families and friends of the troops – as well as the troops themselves. A recent televised interview with soldiers in Iraq in which they called for Rumsfeld’s involuntary resignation provoked an official clampdown. The words is going out to government officials, as well as soldiers: pipe down or get out. A number are choosing the latter.

Gaffney raises the case of Karen Kwiatkowski, a recently retired Air Force officer who served as a Pentagon analyst. Gaffney is furious that Ms. Kwiatkowski dared to question the neocon party line:

“In the case of Ms. Kwiatkowski, a review of numerous screeds she has published on the Internet – including some evidently written while on active duty – evince an ideological hostility towards the President, the Secretary of Defense and others in her chain of command that calls into question her objectivity and the accuracy of her charges.”

In a series of interviews as well as in her columns for LewRockwell.com and Col. David Hackworth, Kwiatowski exposed the inner workings of the neocon nest in the “Office of Special Plans,” recently re-dubbed Northern Gulf Affairs office. But so what? Don’t we have a right to know what’s going on in our own government? That’s what the ordinary American might assume, but to the committed Leninist this is an impermissible breach of party discipline.

There’s more to Gaffney’s ire than meets the eye. He also accuses Kwiatkowski of

“Passing on scuttlebutt whose provenance, to say nothing of veracity, seems highly questionable.”

So what is this scuttlebutt she’s passing around, aside from detailing how the policy shop run by Douglas Feith was home base for the neocons – and why is it so damaging? Gaffney doesn’t say.

The answer is that Kwiatowski points to the Israelis as a possible source of misinformation on Iraq’s WMD and Baghdad’s alleged link to Al Qaeda:

“Kwiatkowski said she could not confirm published reports that OSP worked with a similar ad hoc group in Israeli Prime Minister Ariel Sharon’s office. But she recounts one incident in which she helped escort a group of half a dozen Israelis, including several generals, from the first floor reception area to Feith’s office.

”’We just followed them, because they knew exactly where they were going and moving fast.’

When the group arrived, she noted the book which all visitors are required to sign under special regulations that took effect after the Sep. 11, 2001 attacks. ‘I asked his secretary, ‘Do you want these guys to sign in’? She said, ‘No, these guys don’t have to sign in.’ ‘ It occurred to her, she said, that the office may have deliberately not wanted to maintain a record of the meeting.”

“Make sure it’s good for Ariel Sharon” is how Maureen Dowd describes the neocons’ strategic perspective, and she’s right on target. In their campaign for “regime change” at the State Department, that is the one and only operating principle guiding their actions, aside from an abiding love of power for its own sake. Lobe notes that the battle-cry going up in neocon ranks, led by Michael Ledeen and the usual cast of “American Likudniks, “coincided with suggestions by Sharon that Washington adopt a more confrontational policy vis-a-vis Teheran.”

As Jason Vest showed in a comprehensive piece detailing the interrelations between Gaffney’s CSP, the Jewish Institute for National Security Affairs (JINSA), and corporate sponsors such as Boeing and Lockheed-Martin, Gaffney is a key link in the neocon chain of command, and is such an ideologue that he has low credibility with Team Bush:

“‘Gaffney has worn out his welcome by being an overbearing gadfly rather than a serious contributor to policy,’ says a senior Pentagon political official. Since earlier this year, White House political adviser Karl Rove has been casting about for someone to start a new, more mainstream defense group that would counter the influence of CSP. According to those who have communicated with Rove on the matter, his quiet efforts are in response to complaints from many conservative activists who feel let down by Gaffney, or feel he’s too hard on President Bush. ‘A lot of us have taken [Gaffney] at face value over the years,’ one influential conservative says. ‘…[S]ince 9/11, he’s been less concerned with the threat to America than to Israel.'”

What gets me is that Gaffney accuses Kwiatkowski and other war critics of having “divided loyalties”! What gall!

Who lied us into war? The truth is leaking out, and the neocons’sa outraged response is: purge them!

That’s why we’re seeing so manyhigh-levell government figures go into “retirement,” of late. Kwiatkowski got out while the going was good, along with Thielmann, Westermann, and others, and the purge is not limited to the diplomatic corps and intelligence units, but also includes the military, as MSNBC reports:

“In a move widely seen within the Pentagon as a purge, a dozen or more Army generals are being ushered into retirement as the Army’s new chief of staff, Gen. Peter Schoomaker, takes over.”

The old guard is “unimaginative,” and the Rumsfeld gang sees them as “risk-averse and change-resistant.” Hardly appropriate for the “new,” more “flexible” fighting force that will be charged with policing our newly-won Mideast empire, where the risks are enormous – and the troops are already beginning to complain about the nature of their mission.

But there will be no complaints uttered out loud: the new Leninists will see to that. The classic weapon used by their intellectual forefathers is ready and waiting: let the Purge begin!

Hell hath no fury: Why women are responsible for Middle East hatred