Republican party red from the start 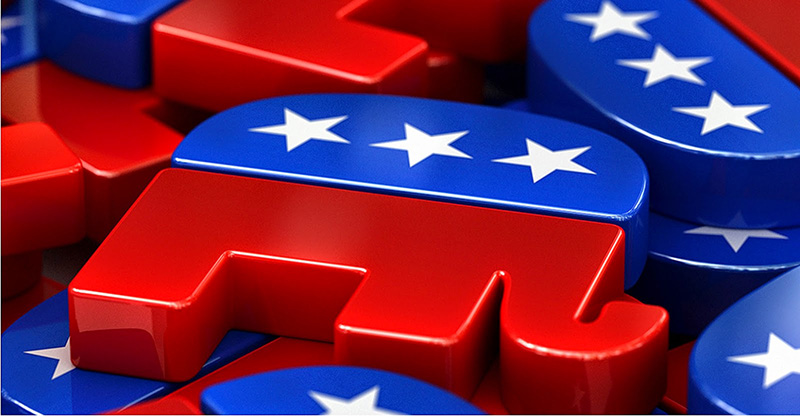 Many patriots these days lament that the Republican Party has “lost its way” and “gone wrong.” It has “diverged” from the fiscally responsible, small government philosophy of Republican heroes like Robert Taft whom Eisenhower’s handlers finagled out of the nomination for President in 1952. We are told that is why today’s Republican Establishment hates Dr. Ron Paul with such a passion; that they hate him because, like Taft, he is the quintessential Republican.

Patriots who say that are mistaken, of course. The reason the Republican Establishment hates Dr. Paul is precisely that he is not a traditional, mainstream Republican, that his platform of freedom is an aberration. The Republican Party didn’t “go wrong,” didn’t “go left.”

But the Revolution of 1848 failed. The perpetrators escaped, just ahead of the police. And they went, of course, to the united States. In 1856, the Republican Party ran its first candidate for President. By that time, these Communists from Europe had thoroughly infiltrated this country, especially the North. Many became high ranking officers in the Union Army and top government officials.

Down through the decades, Americans have wondered about Yankee brutality in that war. Lee invaded the North, but that sublime Christian hero forbade any forays against civilians. Military genius Stonewall Jackson stood like a stone wall and routed the Yankees at Manassas, but when Barbara Frietchie insisted on flying the Yankee flag in Frederick, Maryland, rather than the Stars and Bars, that sublime Christian hero commanded, according to John Greenleaf Whittier, “‘Who touches a hair of yon gray head/Dies like a dog! March on!’ he said.”

But the Yankees, invading the South, were monsters, killing, raping and destroying civilian property. In one Georgia town, some 400 women were penned in the town square in the July heat for almost a week without access to female facilities. It got worse when the Yankee slime got into the liquor. Some two thousand Southern women and children were shipped north to labor as slaves. Didn’t you learn that in school?

Sherman’s scorched earth March to the Sea was a horror the later Nazis could not equal. Why? Because the Yankees hated Negro slavery so much? There can be no doubt that the already strong Communist influence in the North, combined with that of the maniacal abolitionists, was at least one of the main reasons. Slavery was a tardy excuse, an afterthought they introduced to gain propaganda traction.

In retrospect, it appears that because nothing like this had ever happened here, Lee and Jackson did not fully comprehend what they were fighting. Had this really been a “Civil” War, rather than a secession, they would and could easily have seized Washington after Manassas and hanged our first Communist President and the other war criminals. Instead they went home, in the mistaken belief that the defeated Yankees would leave them alone. Lee did come to understand – too late. He said after the war that had he known at the beginning what he had since found out, he would have fought to the last man.

What was the South fighting? Alexander Hamilton was the nation’s first big government politician. Hamilton wanted a strong central government and a national bank. Vice President Aaron Burr killed Hamilton in a duel. The problem was that Burr didn’t kill him soon enough. Henry Clay inherited and expanded Hamilton’s ideas in something called the “American System,” which advocated big government subsidies for favored industries and high, ruinous tariffs, what we today call “socialism for the rich.” Clay inspired smooth talking railroad lawyer Abraham Lincoln, who inherited the Red escapees from the Revolution of 1848 and became our first Communist President.

All of this comes again to mind with the recent publication of Red Republicans: Marxism in the Civil War and Lincoln’s Marxists (iUniverse, Lincoln, Nebraska, 2007) by Southern historians Walter D. Kennedy and Al Benson, Jr. You must read this book, because it irrefutably nails down everything I have said above and then some. Let’s browse through Red Republicans, and, as we do so, remember that the reason most Americans have never heard of all this is that the winner writes the history.

For instance, August Willich was a member of the London Communist League with Karl Marx and Friedrich Engels. Needless to say, Willich became a major general in the Union Army. Robert Rosa belonged to the New York Communist Club and was a major in the 45th New York Infantry. Brigadier general Louis Blenker of New York was a “convinced Marxist.” His 10,000 man division looted people in Virginia, inspiring the term “Blenkered.” Many of his men were fresh from European prisons. Our first Communist President knew this, but turned them loose on the people of the South.

In Red Republicans we learn of nine European revolutionaries convicted of treason and banished to Australia. They escaped to the united States and Canada. Three or four of them, with no military experience, became Union generals, joining at least three other Marx confidants who already held that rank. “Every man of the nine became a member of the Canadian Parliament, a governor of a territory or state in the Union, party leader, prime minister or attorney general.”

Many of these men, not all, were Germans, some four thousand of whom escaped to this country. Known as Forty-Eighters, they quickly added violent abolitionism and feminism to their Communist beliefs. In Missouri, Forty-Eighter Franz Sigel became a Union general and had uniforms made for his Third Infantry Regiment that closely resembled the uniforms worn by socialist revolutionaries in Germany in 1849.

Forty-Eighters who became high ranking Union commanders included Colonel Friedrich Salomon, Ninth Wisconsin, Colonel Fritz Anneke, Thirty Fourth Wisconsin and Colonel Konrad Krez, Twenty Seventh Wisconsin. Communist journalist Karl Heinzen wrote: “If you have to blow up half a continent and cause a bloodbath to destroy the party of barbarism, you should have no scruples of conscience. Anyone who would not joyously sacrifice his life for the satisfaction of exterminating a million barbarians is not a true republican.” Heinzen came to this country and supported Lincoln.

Joseph Weydemeyer had to flee Germany when the Communist Revolution failed. In London he belonged to the Communist League and was a close friend of Marx and Engels. He came to this country in 1851, supported Lincoln, maintained his close friendship with Marx and became a Brigadier General in the Union Army.

Dedicated socialist Richard Hinton had to leave England. In this country he became a Union colonel, a Radical Republican and an associate of maniac John Brown’s. So was Allan Pinkerton, who financed him. At one meeting with Brown, Pinkerton told his son: “Look well upon that man. He is greater than Napoleon and just as great as George Washington.” Yes, Pinkerton was the great detective who founded the agency that bears his name. Why didn’t you know that? In Kansas, mass murderer Brown enjoyed the support of wealthy Yankees (the Secret Six). August Bondi and Charles Kaiser, who worked with Brown there, were Forty Eighters.

What about Marx himself? Marx fled to England, where he is buried. He became the European correspondent for socialist Horace Greeley’s New York Tribune, whose Managing Editor, Charles Dana, was a Communist. Dana hired Marx as a foreign correspondent. Marx wrote often of his kinship with the new Republican Party. Dana’s generosity to Marx kept that scumbag alive.

Remember that Marx never worked a day to support his family, but did find time to impregnate their maid. Dana later became Assistant Secretary of War. All these people were in place when our first Communist President was elected on the Republican ticket in 1860 and provoked Lincoln’s Communist War to Destroy the Union.

The GOP Convention of 1860 took place in Chicago, a flaming center of German Communism. Many such Reds were delegates, including Johann Bernhard Stallo and FrederickHassaurek from Ohio and Heinrich Bornstein from Missouri, a friend of Marx. Socialist Carl Schurz was a delegate from Wisconsin. To guarantee German support in Illinois, Lincolnsecretly bought the Illinois Staats Anzieger. After the election he awarded the editor a consular post.

Socialist Friedrich Kapp was editor of the New Yorker-Abendzeitung. He wrote propaganda for the new Republican Party and helped mightily to deliver the German-American vote toLincoln. With other Forty-Eighters, he was an elector for Lincoln in 1860. Remember, these are just a few examples. You really need to read the book. Call, toll-free 1 (800) 288-4677 to order.

Remember that slavery, for these Communists, was just an afterthought, a tool. Before the War for Independence, it was the Southern colonies that petitioned the King to stop importing slaves into the South. Did you know that Jefferson tried to include in the Declaration of Independence a complaint against the King because his government had forbidden the colonies to end the slave trade? Jefferson’s language was deleted to avoid giving offense to New England, which was making buckets of money trading slaves.

Indeed, did you also know that if slavery was what the South fought to defend, all it had to do was stay in the Union? Lincoln made clear that he would defend slavery and would not free slaves owned by a man in a state within the Union: “I have no purpose, directly or indirectly, to interfere with the institution of slavery in the States where it exists. I believe I have no lawful right to do so, and I have no inclination to do so.”

Remember that the Emancipation Proclamation came well into the war. It was a propaganda stunt that freed only the slaves in areas controlled by the Confederacy; in other words, none. Meanwhile, prominent abolitionist Robert E. Lee, the first man Lincoln offered command of the Union Army, had freed his family’s slaves long before the war. So, what were the Communists who came here after?

Germany was a decentralized collection of independent states. The goal of the Forty Eighters there was a “united, indivisible republic” in which those states would be dissolved. Land and private industry would be confiscated. The government would be transformed into a Socialist dictatorship. These are the ideas the Forty Eighters came to implement here. By the way, that is what Hitler did in the 1930s. That is what the fleeing Communists found so attractive in Lincoln.

So, again, the Republican Party did not “go wrong.” It was rotten from the start. It has never been anything else but red. The characterization of Republican states as “red states” is quite appropriate. What do these revelations mean to us? Again, Dr. Paul is an aberration. He is not a “traditional Republican.” A “traditional Republican” stands for high taxes, imperial government and perpetual war. |

Dr. Paul is much more a traditional Democrat. I refer of course to the Democrat Party before the Communist takeover, which began with the election of Woodrow Federal Reserve-Income Tax-World War I Wilson and was consummated with the election of liar, swindler, thief, traitor and mass murderer Franklin Delano Roosevelt. I am talking about the Democrat Party of Thomas Jefferson.

So of course the Republican Party will do everything it can to sandbag Dr. Paul. Expect that. It rightly considers him an interloper who doesn’t belong there. Yes, because of decades of perversion of popular opinion about the Republican Party, he must run as a Republican. But no patriot loyalty, and certainly no trust, should be forthcoming, because the Party is a sidewinder that will betray him in a Ghouliani minute.

Dr. No is on one side. The Republicrat Party is one the other.

1 thought on “Republican party red from the start”