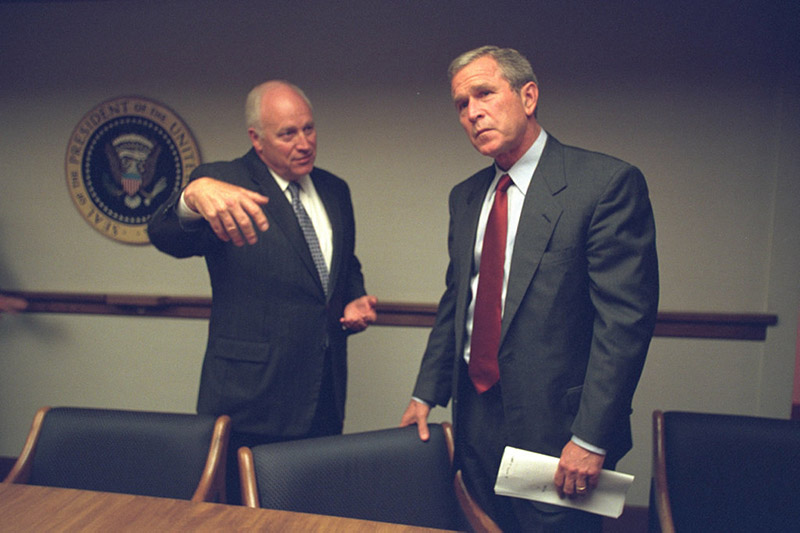 The startling revelation that all 24 intelligence agencies in our government agree that Iran stopped their nuclear weapons development in 2003 is a shot across the bow of G.W. Bush and Dick Cheney.

Seriously furious over how Bush and Cheney misused ambiguous intelligence data back in 2002 and 2003 to justify a pre-emptive invasion of Iraq, the CIA and the rest of our vast Intelligence Community made certain this week by taking the unprecedented step of releasing for full public viewing the latest National Intelligence Estimate (NIE) so that the American people, the media, the Congress and especially the 2008 presidential candidates know the truth – without a White House filter.

In other words, our Intel Community wanted it known that Iran does not have a nuclear weapons development program.

They wanted this known before Bush and Cheney take our nation – again – down the road toward an unnecessary pre-emptive surgical strike in Iran which would have devastating economic, military and energy ramifications.

Make no mistake about this: the Intel Community’s action is a direct shot across Bush/Cheney’s bow.

We have never – ever seen anything quite like this in our history. Here we have an Executive Branch Agency – the CIA – and 23 other departments/agencies – all of whom report to the President of the United States. And they are basically saying to him, “We no longer trust you to tell the American people the truth. You distorted and misused intelligence on Iraq and we are not going to allow you to do it again.”

This has huge ramifications.

1) Bush is not just a ‘lame duck’ politically; he is now a Dead Duck.

2) The Super-Hawks calling for surgical strikes against Iran in the next year have been de-fanged;

3) Hillary is hurt even more in the Democratic race for wanting to go after Iran;

4) The GOP candidates – except Ron Paul – look like Bush Toadies for all salivating at the chance to go after Iran in an Election Year;

5) Bush/Cheney may trot out another excuse to hit Iran: that Iranian agents are infiltrating Iraq and hitting and hurting US troops. This is probably true and was predicted in this space 5 years ago. Retaliation may be justified, but not hitting Iran nuke sites;

6) In sum, this takes Iran off the table as a major 2008 issue, shatters the remaining credibility of the Republican establishment, crushes the neo-cons, who have caused us so much trouble, and puts this Administration on ice.

We effectively have a care-taker government until January 20, 2009.